Play board games online with friends 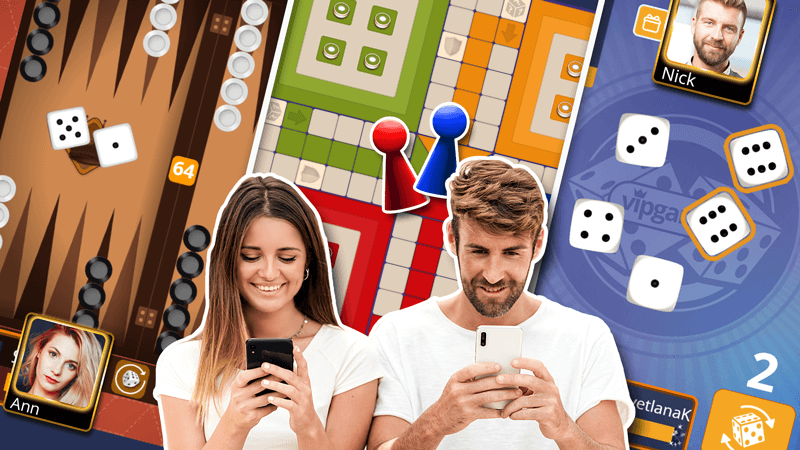 Dating back to ancient times, the game of Dominoes increases in popularity worldwide after the 18 century. The most trusted data about the game leads to its Chinese origin around the end of the 12th century and the beginning of the 13th century.

Dominoes game is played with tiles marked with different points on two sides. To win in Dominoes you have to place all of your tiles on the table before the rest of the players, looking for combination with the tails already placed down. When the round ends, the amount of points awarded to the winner depends on the pieces left to the other players.

The complete rules of the game can be seen on our Dominoes game page. Something interesting to focus on is the difference between the game modes – Draw and Block. The Draw mode allows players to take additional tiles when needed. The Block mode stops the game when no one can put tile on the table and the points are decided based on the actual tiles left on each one of the players.

Who can play Dominoes

The games’s simple but engaging rules make it suitable for children and elders alike.

Where you can play Dominoes: Today one of the best benefits of digitalization is that people can play together with friends from anywhere in the world. Of course this modern asset also applies to one of the most popular board games – Dominoes

Take a look at the TOP 5 Countries where Dominoes is most played:

About the game history

Now it’s time to add some dice to the mix. Ludo is a commercial name of a game that originates as the national game of India. Also known as Pachisi, this game is said to date back to the first few centuries AD, so it has certainly been played for hundreds of years. It’s been published commercially under a variety of names including Sorry! and Trouble. You can find more information about the Spanish version of the game, which is called Parchís here.

This game falls within the “roll-and-move” genre, and players move their pawns along a board a certain number of spaces, as determined by the dice they roll. You may get your pawns into play, thus beginning their journey, by rolling a six. Typically played with 2 to 4 players the object of the game is to be the first to get your pawns around the board, and successfully bring them “home”.

The fun part of Ludo lies in the interaction created by the fact that all the players are using the same board. While the movement of your pawns is determined by the dice, you can choose which of your pawns to move, and this is where the risk and rewards come in: if you land on an opponent’s pawn, that piece is considered to be captured and must start over. This makes Ludo a race game that can be tense, and even though you often rely on the outcome of dice, the level of interaction ensures that it remains exciting and fun to play right to the very end.

Where Ludo is most popular:

Probably Backgammon is the most popular 2 player game worldwide. It is also a racing game that involves dice, but unlike Ludo, it gives players more choices, and there is more room for skill and careful decision making. Like the previous game, this abstract has a very long history, that in this case dates back thousands of years, with archaeologists finding evidence of games like it in ancient Mesopotamia and ancient Egypt. English rules were first standardized in the eighteenth century, and Backgammon continues to enjoy enormous popularity around the world today.

A special board is used for Backgammon, and each player has 15 tokens that have to be moved from their start area around the board, with the winner being the first player to successfully move all their tokens off the board (called “bearing off”). Movement is determined by rolling two dice.

Similar to Ludo, you can capture your opponent’s tokens and force them back to their starting position. Your tokens are only vulnerable to being captured in this fashion if they occupy a space on the board alone. Recent innovations to the game include the addition of a “doubling cube” which enables players to increase the stakes of a particular game. Especially when played for real money, this element can become an important part of the game.

The player who first achieves to bear off all his tokens wins the game.

You can play now or learn more on the Backgammon rules page.

At first sight, Backgammon may seem to be a fairly luck-based game, much like Ludo, because it is dependent on the roll of the dice. But with experience, you will quickly come to realize that there is a lot more scope for clever decisions, especially because there are usually so many options for movement.

To begin with, there are many more tokens than Ludo, so there’s a lot more choice as to which ones you want to move to. Careful placement can protect your tokens from being captured, and this is where some of the strategy lies. You want to minimize the risks of being captured while maximizing your own movement, and careful consideration of probability can also assist greatly in playing well.

People in these countries love to play Backgammon:

History over the centuries

Monopoly is a game that has been known since the late 19th century. It originated in America and is known to be invented by Elizabeth Magie. She had the idea of presenting the economic imbalance in taxation on properties, a popular subject at the timep resented in a family-friendly board game.

The game was patented in 1904, but its oldest version is known by another name: The “Landlord’s Game”. Later the Monopoly pantheon was made by Parker Brothers in the 1980’s. Currently, the Hasbro company owns the license, after obtaining the Parker Brothers’ company in 1991.

The game consists of tiles and a table where different properties are drawn – the object of the game is to purchase those properties.

Mainly the objective of the game is to buy all the properties that exist. Players take turns moving their pieces according to the score of the dice. Thus each player has the possibility to buy the property where it has fallen or leave this opportunity to the bank.

Normally it can be played by 2 to 8 players.

Interesting about the game

When a user falls on properties of other players, they can either pay a property fee or negotiate to buy the property from the owner.

The origins of the Checkers board game can be traced back to 3000 BC. The game is as much strategic and interesting as Backgammon.

The game is played by two opponents situated on the opposite sides of 8×8 chequered board. One player has the black pieces and the other one is playing with the whites. Pieces can only be moved diagonally on the dark squares. One cannot move onto a square that is occupied by another piece. However, if an opponent piece is on the square diagonally in front of you and the square behind it is empty then you jump over it diagonally. You cannot skip this in order to proceed with the game. In this way you capture your opponent’s piece.

The game can end if a player has lost all his pieces or if he cannot move at all as all of his pieces are blocked.

Checkers is actually the american name of the game. In England it is called Draughts and in most non-English languages it is called dame, dames, damas. And the pieces are usually called men or stones.

The game is very interesting and played even by small kids as well. It develops logical thinking. According to the latest researches there are roughly 500 billion possible positions in the game of Checkers.

This abstract game appeared on the market in a commercial form already in the 1970s and continues to be extremely popular today.

How it works: Also called Connect Four, as the name immediately suggests, the aim of Four in a Row is to be the first player to connect four discs (in your own color) in a row. It’s usually played with a vertical board that consists of six rows of seven columns. It’s a two-player game, and players have circular discs in their color, which they take turns to drop down from the top of the board into a column. The idea is to get four discs of your own color in a row, and this can be achieved in a horizontal, vertical, or diagonal line.

The popularity of this classic game lies in part to the simplicity of its rules. Anyone can learn it is merely a minute or so, making it well suited for children as well. And yet there is absolutely no luck whatsoever, and the winner will come down to careful tactical and strategic play.

4 in a row benefits

It’s easy enough for children to learn, and yet a good player will nearly always beat a weaker player, through the skillful placement of his discs. Four in a Row offers more to think about than the universally known Tic-Tac-Toe. Yet like other commercial games geared towards young players, such as the purely luck-based Candyland, it is an ideal place to introduce children to a game where clever decisions will be rewarded.

PLAY FOUR IN A ROW ONLINE

Chess is such a common game that it has its own federation (FIDE) and is recognized as a sport.

A short description of the game is as follows:

-A two-player game which contains 16 white and 16 black figures for each player and one board with 64 equally separated white and black quadrants.

Players should move their figures with the purpose of eliminating the adversary’s ones.

The most important and final target is to immobilize the King figure of the opponent.

In this well known game, the players have to think much more in comparison to other games, due to the amout of possible options the players are able to make.

Chess is a complicated and challenging game due to the 6 different types of figures where each one can be moved in a different way.

Complete informations about the chess figures.

Chess is really famous in:

Yatzy is a very popular table game online in the Nordic countries: Germany, Sweden, Denmark, Finland and Norway. Yatzy has a unique gameplay which stands out from the rest of the board games.

The game is similar to Yahtzee and the Latin American game “Generala”.

Once the player’s turn starts, they have a choice of throwing the dice of up to 3 times. If they choose, they can keep some dice as they are and use their remaining turns to throw the remaining dice.

The “Yatzy” combination is done when the combination of all “2” is achieved. 15 spins are played with the aim of getting different combinations in each one and thus scoring better to win the game. The user with the most points wins.

Check out the Yatzy scoring table.