Interested in the most popular Spanish Games? In this post, we will discuss some of the most famous Spanish card & board games.

In the near future, VIP Games will give you the opportunity to play Spanish games like Chinchón, Tute, Brisca, Escoba, and Ludo for free.

Before explaining the games, we have to provide you with some information concerning the Spanish card deck, which can contain 40 or 48 cards.

Aside from the different symbols and values, the Spanish card deck contains a unique border line around each card. This helps with identifying the suit of that card. The line is called “orla” and is a vital part of each suit.

The suits shown above are:

The Spanish cards can have one value assigned by default and the other value depends on the game. Another difference from a standard deck of cards is that the Jack is called “Sota” & the Queen is replaced by the Horse card “Caballo”: 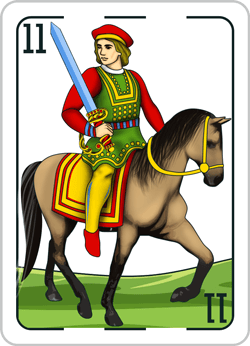 Learn more about the history of Spanish playing cards .

Chinchon is the most popular Spanish card game. It is a discarding game, similar to Gin Rummy. The goal of this card game is to discard your cards by matching them in melds – one suit or 3 to 4 cards of the same value. 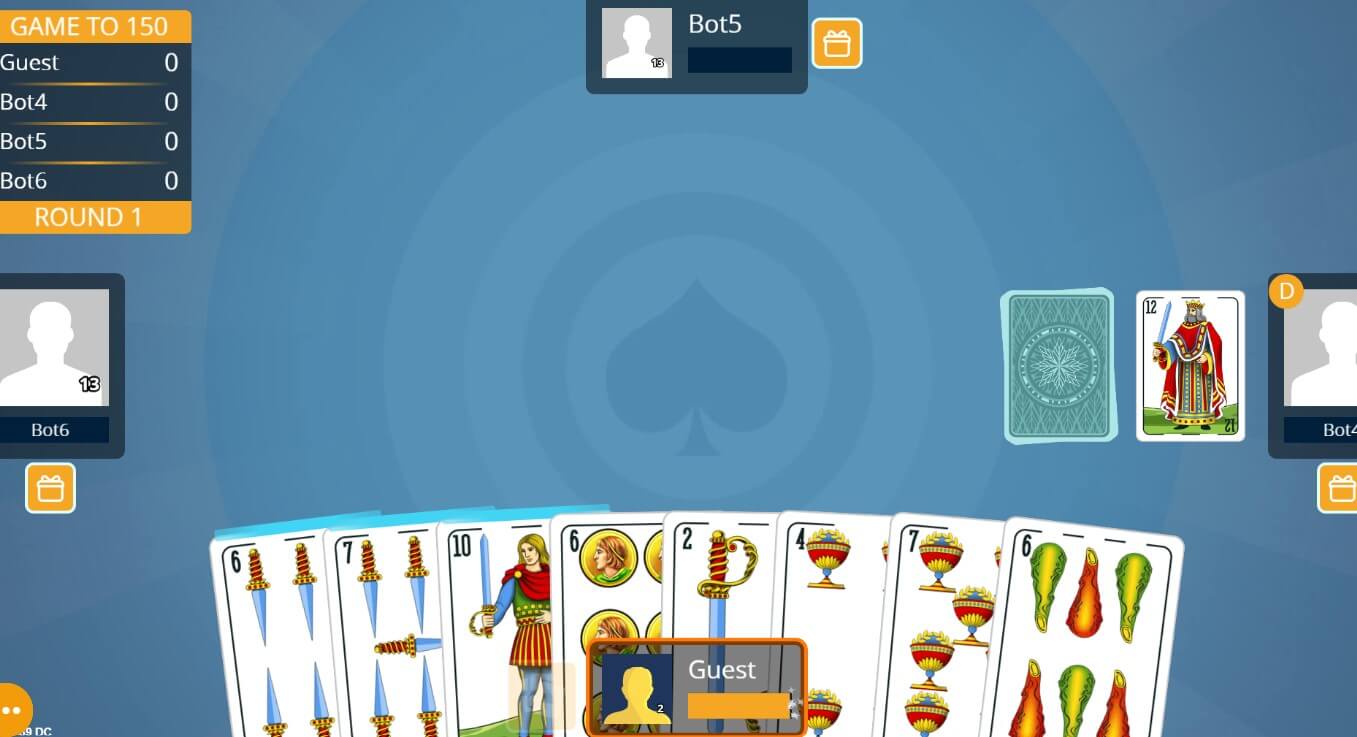 Interesting facts about the game Chinchón

Chinchón is descendent of the popular “Rummy” and “Gin Rummy”.

The name of the game comes from a county southeast of Madrid, as well as the popular drink made in the same region.

Some of the different names are: “Txintxon”, “Chinchorro”, “Conga” or “Golpeado”

Outside Spain, it is most popular in Argentina, Uruguay, and Mexico.

Tute – The game with an Italian name ?

It’s interesting, right? Even if it is a bit unusual that such a popular Spanish card game as Tute has an Italian name. It’s one of the most played games in Spain and the Spanish territories.

Probably you know that “tutti” in Italian means “all”. When you have 4 Jacks or 4 Kings it means that you have “all”. Then from “tutti”, the name “Tute” is derived.

Tute is a trick-taking card game which is very similar to another Spanish game – Brisca. For Italians players: please don’t be concerned- we know that this is also a game with an Italian origin. Also, it is undoubtedly the most played game in Italy.

Tute is a more advanced version of Brisca. For this reason, passionate fans of card games are more likely to prefer Tute instead. In Tute, there are many more complicated options depending on the mode and the exact moment of the game compared to Brisca.

Why is Brisca an easy game?

Until now, we have been sparse with rules and regulations in the games. We will explain them now because Tute and Brisca are so similar.

We will explain the differences very clearly:

IN BRISCA, YOU CAN PLAY ANY CARD YOU WANT WHEN IT’S YOUR TURN.

This is the shortest explanation of the most important difference between the two games. In “Tute” you should play one way if there are 2 players with the deck down, when the deck is finished, or when there are 4 players. Personally, we like Brisca more, because of this freedom to select the cards during your gameplay. You are not obligated to throw cards.

The popular Italian game is a little bit different in Spain, notably, the name and scoring are different. The other rules are nearly identical. As usual, the fans of this gameplay with the Spanish 40 card deck. The used cards are 1, 2, 3, 4, 5, 6, 7, Jack, Horse and King.

“Escoba de 15” or “Broom of 15” (when translated into English) is played mostly in Spain and Argentina. Like in Chinchón, players have to match one card from their hand with one or more cards on the table to make a sum of 15.

Compared to the other Spanish games, “Escoba de 15” is the most similar to Chinchón, Rummy, and Buraco.

It depends on the country. Rummy is fairly popular, but not as much as in the USA or UK.

Parchís or Parchis is one of the most played games in Spain. There are relatively few differences, compared to Ludo. (Ludo image below)

The goal of both Ludo and Parchís is to get all four of your pieces into the finish area of the corresponding color.

About the distinctions between Parchís & Ludo.

The board in Ludo has arrows that lead to the center of the board highlighting the endpoint of the game. While in Parchis the board is much simpler and follows the original antique design more closely. Another difference is the fact that Ludo is played with a single die and Parchís is played using two. This results in Parchis being much faster than Ludo.

We update our blog regularly, so stay connected for information regarding the most interesting news about Spanish games.

In VIP Games, you’ll be able to create custom games and participate in featured tournaments. Playing these interesting and popular Spanish games will give you an insight into a part of Spanish pop-culture. Also, you will be able to contact and befriend Spanish players.

Playing Spanish games at a professional level is just one of the possibilities you have in the best multiplayer gaming platform – VIP Games. Many exciting social features and presents are waiting for you.

Registering an account with VIP Games unlocks a lot of surprising features like private chat, global chat, and image sharing.

Check other interesting posts for the most popular card & board games.