In Briscola the main objective is to win more rounds than the opponents. The party with the most points wins the round, and the party that wins the most rounds is the winner of the game.

Similarly to other Italian trick-taking card games, in Briscola it is essential to earn more points by taking high-value cards.

The game is played by 4 players using the following cards:

The point values of the cards in all suits are:

The rules for dealing the cards in the beginning of a hand are as follows:

The common rules for playing the cards are:

If there are unused cards in the stock pile, after a player wins a trick all players receive another card from the deck with unused cards. The first to obtain a card is the player who won the trick, followed by the other players in the direction of play.

There are no rules for what cards the players should play in a trick. All players can play any card they want.

Each trick is won by one of the players as follows:

The first team that wins a specific number of rounds (as set for the table, for example 3) wins the session. 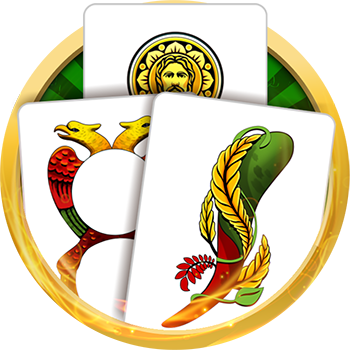