Why Klondike is the most popular Solitaire game

People have played solitaire games for many decades. Essentially, any card game played only by one person can be considered solitaire. Today, there are a lot of different variations, such as FreeCell, Spider, Canfield, Pyramid, Yukon. And you can find almost all of them available online. But without a doubt, the most popular one is Klondike.

Klondike is one of the oldest solitaire card games. It is so well known and recognized worldwide that the terms “Solitaire” and “Klondike” are often used as synonyms (especially in the US and Canada). In the UK, the game is also referred to as “Patience”.

The name Klondike most likely comes from a region in Canada famous for the Gold Rush in the late 19th century. The popularity of the game widely increases with the growing usage of personal computers and also the fact that Microsoft includes it in the Windows 3.0 operating system.

Klondike Solitaire has easy-to-understand rules and engaging gameplay. It’s perfect if you want to train your strategic thinking. Or maybe if you just want to have some fun in your spare time.

The game goal is to use all the cards in the deck to build the 4 piles of cards (the 4 foundations) classified by suits starting with the Aces in ascending order.

2. How to play Klondike

The remaining cards are placed face down at the top left of the layout, thus forming the Stock. You can draw cards from the stock at any time. Each card you take from the stock, but haven’t played, is considered a waste. 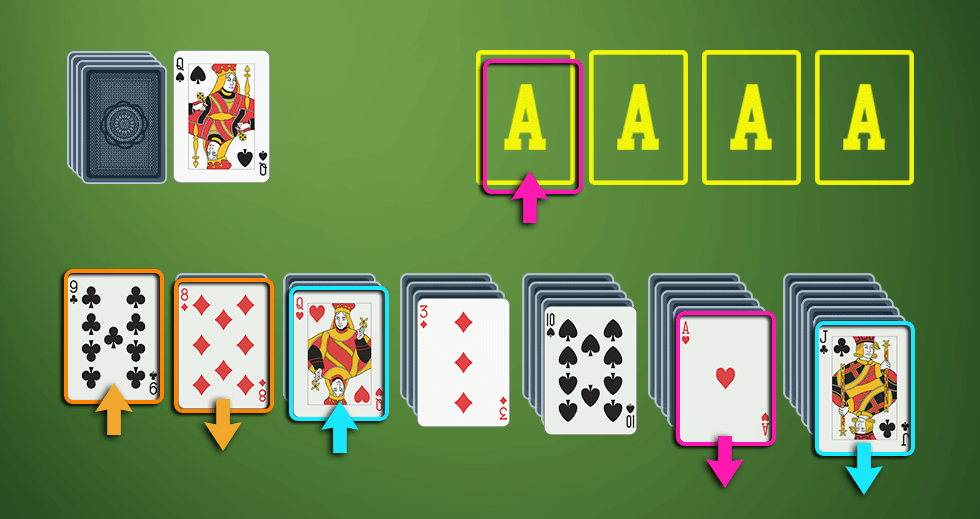 The four foundations (at the top right) must be grouped by suit from Ace to King. To do this, you have to organize the cards in the piles in descending order and alternating colors. Each face up card in the piles (or a whole pile) can be moved to another pile based on its highest card. Any empty stack can be filled with a King or a pile of cards starting with a King.

The objective of Klondike is to transfer all cards from the Tableau, Stock, and Waste Pile into the 4 Foundations, sorted by suit. The game is finished if all 52 cards have been placed into the 4 Foundations. If the player can no longer make any meaningful moves, the game is considered blocked. At this point, winning is impossible.

3. Where to play Klondike Solitaire

There are many options where you can play solitaire for free.

But if you want a top-quality game with fascinating graphics and a lot of cool features, we recommend trying our brand new Klondike Solitaire Offline app. The game is available for Android and iOS, and you can play it anywhere. No need to worry about wi-fi connectivity.

Some of the exciting things you will find:

Here is how the scoring works:

The penalty points can be disabled in settings. The total game score is the sum of all the boards’ scores per game.

Originated decades ago, Klondike is the perfect solo card game to play in your free time. When you finish a game by completing the 4 foundations, you will feel pure satisfaction. It is a strategic game that you can become better at. The long history, easy access and simple rules make Klondike the most popular Solitaire card game.