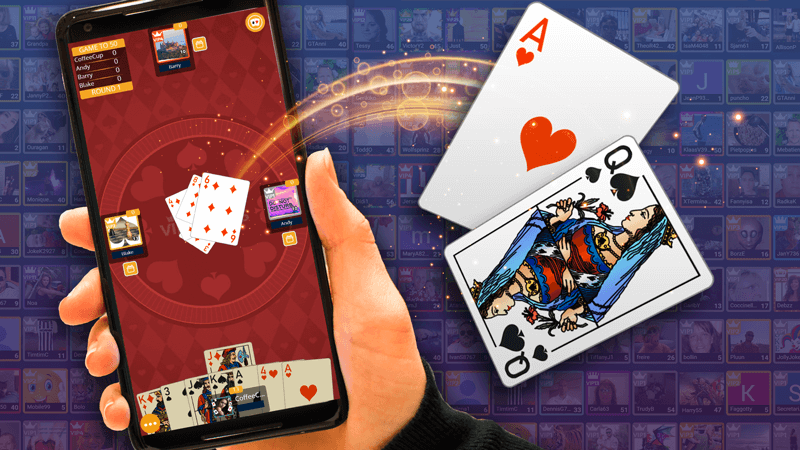 Almost everyone has a deck of playing cards somewhere. Traditional card games have been a staple form of entertainment ever since playing cards first arrived in Western Europe in the late 15th century. They spread rapidly as printing processes developed, and history shows that card games have been actively played and enjoyed for more than 500 years.

There are literally hundreds and hundreds of different card games in existence, and many of them have local variations and house rules unique to certain countries and ethnic communities. Let’s introduce you to five of them that are well-known and widely-played around the world today:

You can play for free all popular card games online without registration.

Background: Like many people, I first learned Crazy Eights when I was a youngster. This is an ideal game for families and makes an excellent starting point for children to be introduced to card games. Many people are already familiar with the card game Uno, not realizing that this is merely a commercial variation of Crazy Eights and that you can play it with a standard deck. It is considered a “shedding” game, because you’re getting rid of your cards, and dates back to the 1930s and 1940s.

How it works: The goal of Crazy Eights is to be the first player to get rid of all your cards. Everyone starts with the same sized hand of random cards, say eight cards. You take turns playing a card, which must match either the suit or value of the card at the top of the face-up discard pile. If you can’t play, you take a card from the draw pile, playing it if you can.

But the real fun comes in some of the special abilities of the cards. For example, certain cards allow you to change to a different suit (Eights), while other cards require the next player to draw two cards (Twos) or to skip a turn (Queens), or to reverse the order of play (Aces).

Why it is fun: Whether you play Crazy Eights online or with friends, it is very easy to learn and understand. Even young children can easily catch on to the rules, and enjoy playing. The special abilities of some cards inject real excitement and these twist and turn help keep things interesting as the game goes along. There is some skill in how to play crazy 8, but it usually evens out, and even kids have a chance of beating adults, making it fun for people of all ages. 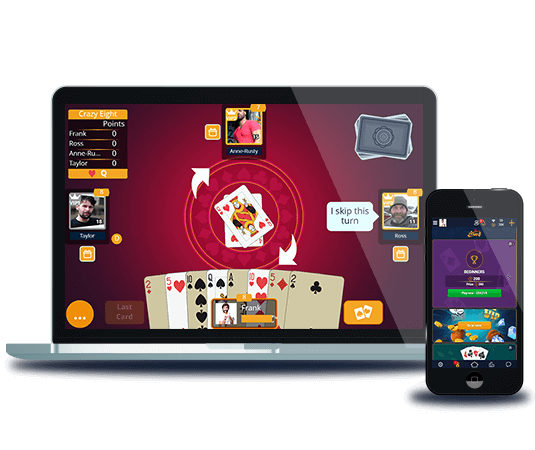 Background: Hearts is an ideal introduction to a style of the card game known as a “trick-taking” game. Trick taking games are arguably the most common type of card game and for good reason. In these games, players all have a hand of cards, and game-play revolves around a series of “tricks”.

Each trick involves everyone playing one card from their hand, with the requirement to follow the suit (where possible) of the player that led the first card of a trick. The trick goes to the person who played the highest card, and that player captures all the cards played in that trick, and lead by playing the first card of the next trick. The popularity of Hearts goes all the way back to the 1800s.

How it works: What makes Hearts a true classic among trick-taking games, is that you must aim to avoid taking any tricks in which Hearts cards have been played, since these count as minus points. But the biggest card of all to avoid capturing is the Queen of Spades, which is worth a whopping 13 minus points.

There is a special option of “shooting for the moon” by trying to capture all these point cards, but it’s risky and difficult, and it is rare to see someone achieve this successfully. At the start of each hand, you also get to pass three cards to another player, and this can help you improve your hand to increase your chances of success – although the cards you receive might just make your job all the harder!

Why it is fun: The appeal of playing the Hearts game online is that you can use real strategy in how you play your cards, and yet there is still some real luck of the draw, to help level the playing field somewhat. Hearts tend to be a fun and social experience, unlike the most famous trick-taking game of all: Bridge.

Bridge is much harder to learn and requires real skill, plus there are many conventions about how to play with a partner that needs to be mastered. In contrast, Hearts is very easy to learn, plays quickly have an addictive quality about it, and yet gives room for meaningful decisions and skillful card-play. 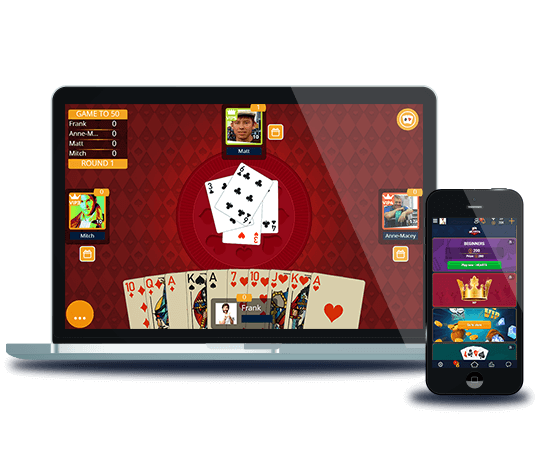 Background: Many trick-taking games use a trump suit, and Euchre is a good example. While the game of Hearts doesn’t involve trump suit, in Euchre a particular suit is designated as “trump” each hand, which means that cards of that suit automatically beat cards of any other suit.

Euchre also increases the level of difficulty from Hearts because you need to play with a partner, and you earn points together. The enormous popularity of this partnership game in North America goes back to the 19th century, and this social game is especially popular in parts of Canada and the USA.

How it works: Just 24 cards are used for Euchre, with the Jacks serving as powerful “bowers”, and they are the most powerful cards in the game. Everyone starts with a five-card hand, and the trump is determined by a turned-up card. The aim of the game is that one partner is trying to win the most tricks. You accumulate points over multiple hands, trying to be the first partnership to get a fixed number of points that is your target. If needed, you can see more euchre tips and tricks written by one of our players.

Why it is fun: The partnership play of Euchre gives it a very different feel from Hearts, and that is a big part of its appeal. Given the relatively small amount of cards in play, fortunes can change quickly from hand to hand, and you always feel that you’re in with a chance, especially if you get the right cards.

The challenge is to work together well with your partner, without knowing his cards. It is a highly social game, and can especially be fun when played in a casual tournament setting. But you do need exactly four players to play Euchre, so if there are only two of you, you might want to look into Ecarte, which is an excellent trick-taking game very similar to Euchre and is better suited for a two-player game. 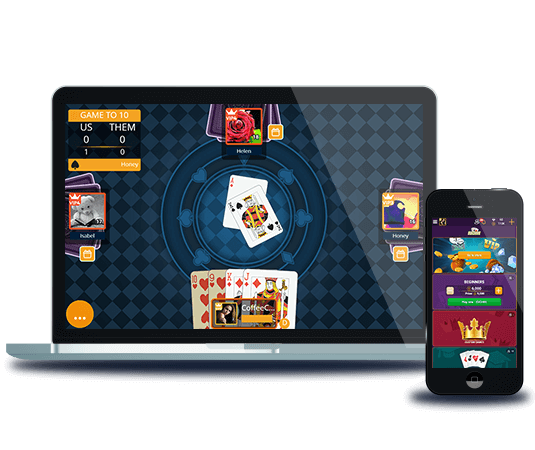 Background: The Jass family of card games first originated in the Netherlands, and Klaverjassen is the Dutch member of this family. Its close relative Jass is the national card game of Switzerland, but these card games are enjoyed in many parts of Europe, often with slight variations to the game-play.

Besides the Swiss Jass, the wider family includes Belote (France), Klabberjass or Clob (Germany), and Klaverjassen (Netherlands). These games are also somewhat similar to the classic card games Bezique and Pinochle. The game available on VIP Games is the Dutch member of this family of classic games, namely Klaverjassen.

How it works: Klaverjassen is played with two players or in partnerships, with the partnership of the game being the most preferred way to play. Only 32 cards are used, and the aim is to earn as many points as a team over sixteen hands. One of the biggest decisions of the game is to choose the trump suit, which is the privilege of the player next to the dealer.

The cards all have different point values, and the ranking of the trump suit (J,9,A,10,K,Q,8,7) is different than the other suits (A,10,K,Q,J,9,8,7). You can also earn bonus points by capturing particular combinations of cards in a trick, such as runs of consecutive cards, four-of-a-kinds, and the king and queen of trumps.

Why it is fun: Partnership play is really taken to the next level in Klaverjassen. When playing, it is often considered acceptable to signal to your partner what you have in your hand, based on what you play. Unsurprisingly, Klaverjassen gives much more opportunity for skill than more social games like Euchre, because you can select the trump, and work together with your partner not just in capturing tricks, but also in capturing special combinations that earn bonus points. 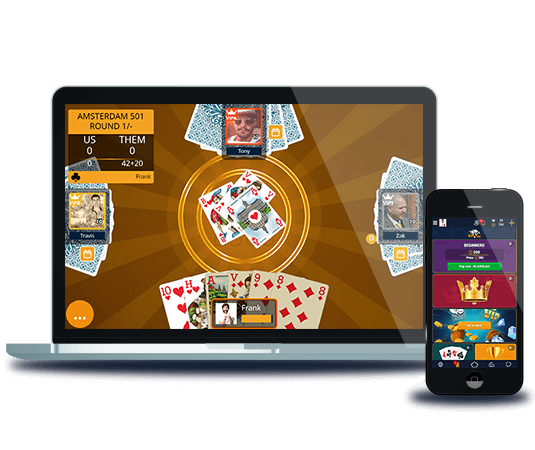 Background: Rummy is a fantastic well known card game that has numerous variations, that are played in different parts of the world. For all variations is essential the card melding. All you have to know is how to meld the cards in hand into relevant sequences or sets, by drawing and discarding cards.

The rummy principle of drawing and discarding is dating back from the 19th century. It is first played in China.
Rummy games are popular also in India. The so-called Indian Rummy is an extension of the American Gin Rummy.

How it works: Тhe objective of rummy card game is to arrange the 13 cards in valid sequences. To win the game you need to make a minimum 2 sequences. One of these 2 should be pure sequence and the rest 1 or more can be any valid sequences or sets. Without a pure sequence you cannot make a valid rummy declaration and this is actually one of the most important rummy rules.

A pure sequence is a group of three or more cards of the same suit, placed in consecutive order. To form a pure sequence you cannot use any Joker or wild card.
The player who gets rid of his cards first is the winner. The discarding of the cards can be done in the following three ways: Melding, Laying Off or Discarding.

Why it is fun: Do you know why the game became that popular?! As it is pretty easy to learn and play, but also very interesting. Moreover, nothing is required except a deck of cards and 4 players. Players should use their logical thinking to play the game well.
Another fun fact that it is also believed that the name has come from the alcoholic beverage rum, as in the beginning the defeated player was supposed to pay for the next round of drinks. Funny right?! Then try your logical thinking and enjoy our Rummy game. 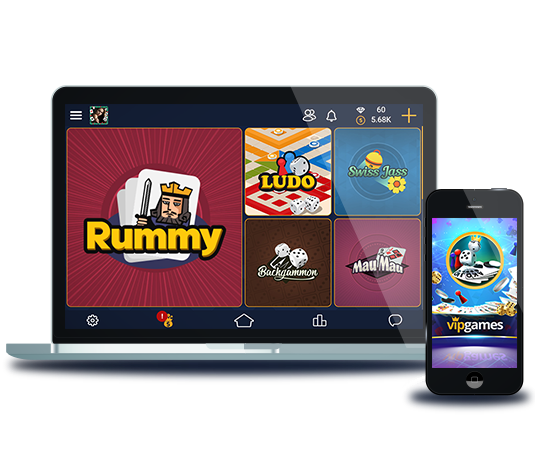 If you enjoyed reading this article, please check out our post about the best board games online.

You can also read this interesting article about specific card games for 2 players at our VIP Spades website.